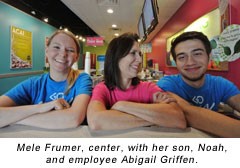 Mele Frumer’s Planet Smoothie franchise near downtown Orlando may be the ultimate family business. She has six children and seven years ago they were all either teenagers or pre-teens. Mele wanted her kids to learn great work habits and she was also interested in owning her own healthy franchise. Those two interests came together when she discovered Planet Smoothie.

“It was a happenstance discovery,” she says. “I had gone to check on job opportunities for my kids at a restaurant and was told they would have to be 18, so I ducked into the Planet Smoothie next door.”

Planet Smoothie’s simplicity was perfect for teenage employees, the smoothie market was growing fast, the cost to become an owner was reasonable — and it was healthy! That last point was very important to Mele.

“I’ve always tried to eat healthy myself and exercise and set a good example for my children.”

This is her story.

What did you do before owning a Planet Smoothie? I was a single mom of six kids and I was cleaning houses for a living. I had pretty much been a housewife up until then. When my father passed away I inherited a little money. Somewhere in there I re-married and I started looking for something that I could do that wouldn’t require as much hard labor. I also wanted my kids to learn great work habits. My kids were pre-teens and young teenagers at the time. We were at a Subway one day and I asked how old their employees have to be. I was told you have to be 18 because of the ovens and knives. So we walked into Jason Mann’s Planet Smoothie next door and learned that high schoolers could work there — and that there was a store for sale nearby!

Over the years, five of my six children have worked for me at the store — not to mention their fiancés and girlfriends — and I have absolutely loved it. My 17-year-old son, Noah, has been helping since he was 12 and he can run the show. It has been great for them — it’s given them a taste for a real job a little earlier than most of their friends.

It sounds like you’ve had quite the family business! I’ve had a great time doing the Planet Smoothie thing. It’s a perfect little business to do with your kids. It’s not too complicated.

What else made Planet Smoothie stand out? It was very healthy. I would never go into something that was unhealthy. It has gotten healthier and healthier. Also, since I didn’t have a business background at all, I thought it was something I could wrap my head around. Planet Smoothie uses whole fruits and vegetables to provide great nutrition to customers. We also offer dietary supplements to provide even more benefits.

LeanLeaf (a proprietary sweetener made from agave nectar and stevia) and other things that make us healthier. The only knock on many of our smoothie competitors is that they can be high in sugar. LeanLeaf was a giant leap for Planet Smoothie, because it allows us to provide great-tasting smoothies without adding sugar which means they’re lower calorie too.

Do you feel like Planet Smoothie keeps up with health trends? Yes, they are ahead of things. They listen to customers and franchisees. They recently mailed a tablet to every store with a program loaded onto it that let customers take a quick survey while we made their smoothies. They would get a prize for filling out the survey and Planet Smoothie was able to tabulate the data to see what customers like, what they don’t, why they come to Planet Smoothie, where else they go. They also do a lot of work on social media to spot what customers are interested in…

Contact me to find out some of the many options that are available to you, and how you can get started in a business of your own.